The collective thinking and construction of a magazine in the shape of film-tract rise from the desire to question the present through a dialectic of images.
The domain of the programme, the series, the chronicles and information was embraced by the TV, dictating a tradition around it; in their same short arch of existence the cinematographic circuits sustained authorial and spectacular productions. These and other elements contributed and contribute to the opposition of anything not corresponding to the programme, of something that even if frequent, rhythmic and constellated by intervals does not fall into the series.
Beyond journalism, chronicles or strict documentary, this film-magazine, where the terms determine themselves reciprocally, is a way to re-think a poetics of images not instrumental to the factuality, nor cut from lives.
The translation was the first outburst, trying to bring those paper experiments that used the magazine as a critical mean – even before than communications medium – towards audio-visual languages, where often one forgets that also words here have a space.
The process is articulated looking for access to the resources, raw materials of the film-magazine, plunging the hands in the archives that as much as they grow, as much as it seems they become inaccessible.
As in a city: its underground or open-air paths, the views or the roadblocks, lives crossing it, the ghosts of the ones that crossed it, the memories of the lines that once found rest on its walls: they’re all an immense archive. Each neighbourhood looks like a bundle, shelve or opened books, where most of them remain un-explored, forgotten or denied. Each day we experience or inexperience it.
In the backstage or under the spots, these resources are already part of our present: it is a matter of using them, attentive to the different languages, therefore open to translation. 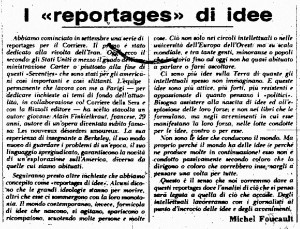 On the earth there are more ideas than the ones intellectuals often imagine. And these ideas are more active, more strong, more resistant and passionate than «politicians» think. One should assist to the birth of ideas and the outburst of their forces; and not in the books formulating them, but in the events where they manifest their strength, in the struggle for ideas, or against them. Ideas are not leading the world. But precisely because the world has ideas (and because it produces them continuously), it is not passively led following who is directing or who would teach once and for all to think. This is the meaning that we would like to give to these reportages where the analysis of what one thinks will be connected to what happens. Some intellectuals will work with journalist at the crossing of ideas and events.
«reportages» of ideas, Michel Foucault, Corriere della Sera, Milan 12 November 1978 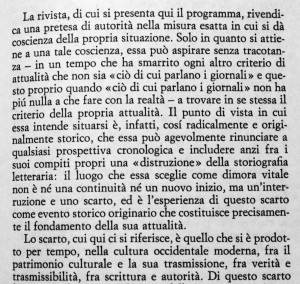 The review whose project is presented here makes its claims to authority in precise proportion to its awareness of its own situation. Only in so far as it attains such awareness – at a time that has lost sight of any other criterion for events than «what the newspapers say», just when «what the newspapers say» no longer has a lot to do with reality – can it aspire without arrogance to find within itself the criterion of its own timeliness. The point of view which it intends to adopt is in fact so radically and originally historical that it can easily renounce any chronological perspective, instead including among its tasks a «destruction» of literary historiography. The site it chooses to inhabit is neither a continuity nor a new beginning, but an interruption and a margin, and it is the experience of this margin as founding historical event which constitutes the very basis of its timeliness. The margin in question is the one produced early in modern Western culture between cultural patrimony and its transmission, between truth and its modes of transmission, between writing and authority.
«Project for a review», Giorgio Agamben in Infancy and history. The destruction of experience, Verso, London 1993, p. 143 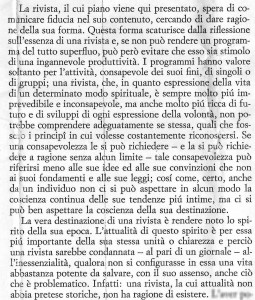 The journal whose plan we present here hopes to create confidence in its content by giving an account of its form. This form arises from reflecting the nature of a journal: a journal should both make a program superfluous and avoid it as an incitement to pseudo-productivity. Programs are valid only when individuals or groups have particular, well-defined goals. A journal that sets out to articulate the experience of a particular way of thinking is always more unpredictable and unconscious than any expression of will, but by the same token it holds greater promise for the future and is capable of much greater development. Hence, such a journal would be poorly placed to give an account of itself, no matter what terms it chose to express its position. Insofar as reflection is expected of it – and in the right sense no limits can be set to reflection – it should concern itself less with ideas and credos than with foundations and governing principles, just as human beings should not be expected to have full knowledge of their own innermost tendencies but should be conscious of their vocation. The vocation of a journal is to proclaim the spirit of its age. Relevance to the present is more important even than unity and clarity, and a journal would be doomed – like the newspapers – to insubstantiality if it did not give voice to a vitality powerful enough to salvage even its more dubious component by validating them. In fact, a journal whose relevance for the present has no historical justification should not exist at all.
«Announcement of the Journal Angelus Novus», Walter Benjamin. in Selected Writings. Vol. 1. 1913–1926, MA: Harvard Belknap Press, Cambridge 1996, pp. 292–296

The journal was planned as an organ from which experts from the bourgeois camp would were to undertake the exposition of the crisis in science and art. The end was to show to the bourgeois intelligentsia that the method of dialectical materialism are dictated to them by the necessities most characteristic of them: necessities of intellectual production and research, and furthermore also the necessities of existence.
Walter Benjamin to Bertolt Brecht, after the 5th February 1931, GB IV, S. 15 (Letter 705), from «Krise und Kritik» in Erdmut Wizisla, «Benjamin und Brecht. Die Geschichte einer Freundschaft», Suhrkamp, Frankfurt am Main 2004, p. 129 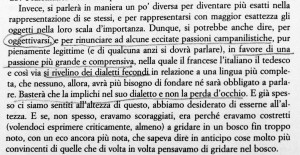 Instead, we will speak in a slightly different way for becoming more exact in the representation of ourselves, and for representing with more precision the objects in their scale of importance. Therefore, one could also say, for objectifying ourselves, and to renounce to some excited parochial passions, even if fully legitimate (and about some of them we will have to talk), in favour of a bigger and more comprehensive passion, where French, Italian and German, and so forth, will reveal themselves as fertile dialects in relation to a more complete language, that no one, then, will have the need to institute nor will be obliged to talk.
«Diario in pubblico» [Public diary], Ingeborg Bachmann in Gulliver: progetto di una rivista internazionale, Marcos y Marcos, 2003, p. 126 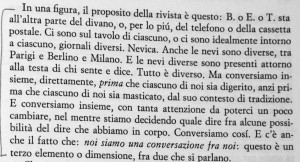 The purpose of the magazine is in a figure: B. or E. or T. is on the other side of the sofa, or, mostly, the telephone or of the post office box. On everyone’s table or around everyone there are ideally different newspapers. It is snowing. In Paris, Berlin and Milan also the snow is different. Everything is different. Yet we’re talking, directly, before everyone would be digested by its traditional context. And we’re talking together with such an attention that we can change ourselves a bit, while we’re deciding which one to say among some of the possibilities of saying that we have in our body. And so we talk. And there is also the fact that: we are a conversation among ourselves: this is a third element or dimension, between two that are talking. What was happening that was hostile or more complicated, while together all of us, without any stranger (journalist), were talking, eating, going out to walk out of the meeting smoke-room?
«Una rivista internazionale. Osservazioni di Francesco Leonetti», Francesco Leonetti in Il menabò 7. Gulliver. Una rivista internazionale, Einaudi, Turin 1964, p. XI 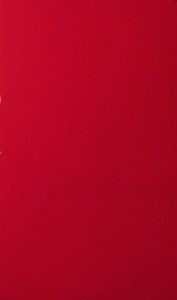